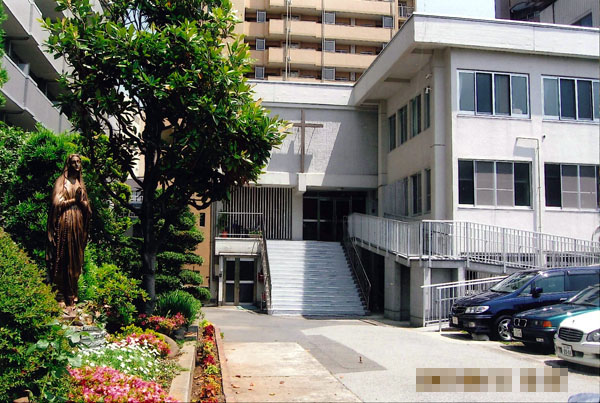 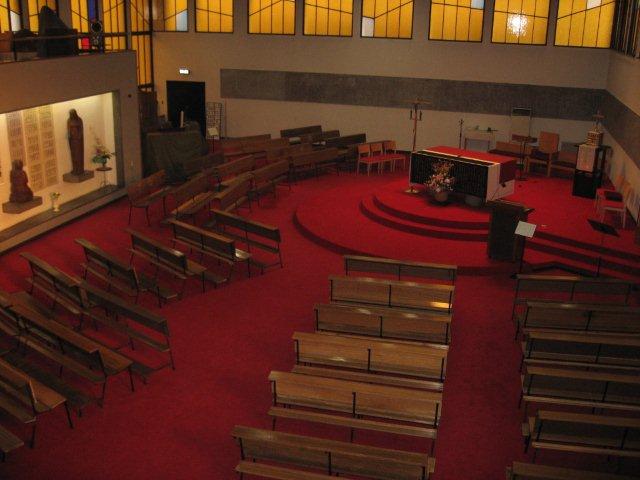 4th Sun. After the mass

On March 1945 (Showa 20) all the area of downtown in Tokyo had been burn to the ground totally. The underground of JR Ueno Station had been saved narrowly from the flames. Many hungry burnt-out people laid down on the cold concrete passage permeated with stink and cold. Fr. Joseph Flaujac M.E.P. who happened to pass by there had organized a patrolling medical team with Sisters of Seibo Hospital of Franciscan Missionary of Mary and Sisters of Bethany for giving the victims treatment. This activity had been continued for three years and the numbers of patients were more than 25,000. Fr. J. Flaujac had purchased a land to establish the mission base of his medical activities. There were some barracks around the land. Sisters used these barracks to open the public health office, Sakamoto Hospital), their convent and nursery room. Many parishioners used these facilities and increased the numbers. But the chapel had not yet been formed and a used old passenger car was used for the chapel once upon the time. Then the nursery room had been used as the chapel and thus the foundation of the church had been formed gradually. In 1950 Fr. Etienne Durecu, M.E.P. was assigned as the first chaplain and also Ueno Nursery School had been opened. On Sundays the building of the nursery school had been used for the chapel of Sunday Holy Mass. Ueno Church at that time was still a sub-parish of Asakusa Church. The patron Saint of the church was St. Bernadette. Because Archbishop Jean Baptiste Alexis Chambon’s home town was the district of Lourdes in France and there was no church given the Saint name of St, Bernadette yet in Archdiocese of Tokyo. In 1954 (Showa 29) Ueno Church has been admitted as an independent parish and in 1955 (Showa 30) Fr. Marcel Le Dorze, M.E.P. was assigned as the third chaplain. When the church regain a certain time of serenity after the recovery from the World War II Fr. Joseph Flaujac made his plan to rebuild a Nursery School and the public health office. At the same time it was decided to build the new chapel of the church and then the parishioners tried to collect the fund but still in lack of amount. During the Fr. Marcel Le Dorze’s home visit to France he traveled around the churches in France for getting donation for the new chapel. It was lucky for Ueno Church dedicated to St. Bernadette since the 100 anniversary of St, Mary’s apparition had been celebrated in all over the France that time. More over the special article of the situation on Catholic Ueno Church was published on the Catholic French magazine for family and then many people gave donation to help the church.   Thanks to those people the chapel has been built in 1961 and then the all the names of donors have been dedicated under the alter of the chapel. The whole relief project started after the World War II had been ended the mission. In 1972 (Showa 47) Sakamoto Hospital and Ueno Nursery School had been closed. Sisters of Bethany had returned to their head convent and in 1987] (Showa 62) the Ueno Church has been transferred of jurisdiction over to Archdiocese of Tokyo from M.E.P.. Fr. Ludovic Ibaragi Ejiro Sugita was assigned as the fourth chaplain. In 2001(Heisei 13) the church welcomed the Jesuit Chinese Center in to the same community and in 2004 the church had celebrated 50th years anniversary. Ueno church had been borne in the ruin of World War II with the support of Paris Foreign Mission and Sisters of Bethany as a small poor church. The image of future church will be to become the base of downtown to work together with Evangelical Cooperation Unit for the service of preaching the Gospel to those who thirst for the words of the Lord and giving their necessary aide continually.

Together with Jesuit Chinese Center as one Eucharistic community Sunday Holy Mass is at 10:00 am, Chinese Mass is at 13:30. On the special feast days of the church like Easter, Pentecost, Christmas the joint Mass of the two has been celebrated at 12:00 and Assumption Mass has been held at 19:00 as well. Together with Asakusa Church and Honjo Church of Downtown Evangelical Cooperation Unit joint Sacrament of Confirmation, exchange of homily among the chaplains, Sacrament of Confession in the Advent and Lenten seasons have been taken. As the friendship program table tennis and dancing programs have been held to promote mutual exchange. On Sundays and Weekday evening the church facilities have been opened toward foreign groups who have various problems to be solved.

Please contact to the guidance staff regarding your application to join the group activities who is around during the Sunday Mass near the entrance of the chapel..