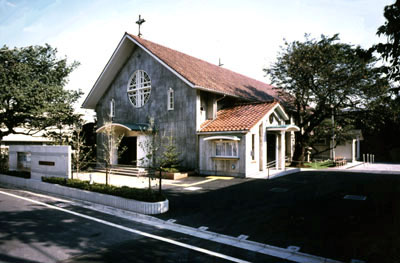 Soon after the plan of building the new church had been taken up and all the parishioners have made their best effort with various activities to raise the fund. On every Sunday bazaar, donation for the new building and charity concert had been held at the church. In 1954 the big support of 10,000 US$ ( about 4 million Yen) had be given from Archbishop Richard James Cushing of Boston in U.S.A. to Archbishop Peter Tatsuo Doi and then he had received it as a fund of the church. The design had been done by Prof. Kenji Imai of Waseda University. The chapel has been dedicated to St. Thaddeus who was not so highlighted Apostle but has been respected as the saint for the neglected which was the reason of choosing him as the Patron Saint of the church. The outside of the church building was made of concrete. The stained glasses of the seven stars at the alter and the arch in front are the characteristics of Prof, Imai’s design. The earnest desire of building a church at the convenient place for a mission center has been fulfilled and on 21st of March in 1955 the new chapel has been completed. Archbishop Peter Tatsuo Doi has offered the solemn mass on the occasion of the new chapel of Seiko Church dedicated to St. Thaddeus with 65 priests in grand style and many have attended to it. On 3rd of November in 1963 the church has celebrated the 10th year’s anniversary and the present Our Lady of Lourdes has been completed with blessing at the same time. In April of 1965 the church bell has been donated by late Mr. Keisei Sakka, a musician, who has ordered specially to make the bell to Kόln. The bell has been rung with clean bright sounds on the evry morning of Sunday telling the time of Mass all over the school town of Sejou. For the coming occasion of the 50th anniversary of the church total plan of renovation and maintenance has been started, On the 3rd of November in 1968the statue of Our Lady of Lourdes, in October of 1978 the two stories hall building, in November of 1985 the parsonage have been completed. In September of 1999 The chapel has been renovated and the elevator has been set up at the hall. In March of 2005 the commemorative publication of the special issue on 50th year’s anniversary has been made. In April of 2005 the 50th year’s anniversary celebration of the church has been held and Archbishop Peter Takeo Okada has offered the Mass

In the church there are some valuable architect and art. The number of parishioners is 2,000 And they have participated into various church activities and we aim to make the Church community with friendly and shared relations among us all.