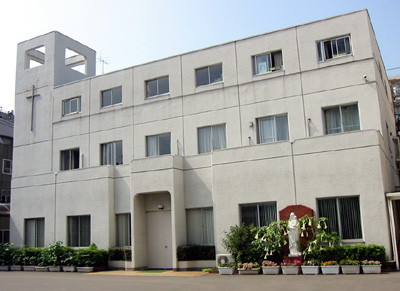 Epiphany of the Lord

Fr. Albert Breton (the First Pastor Priest) from the Paris Foreign Mission Society had been taken care of Japanese people in the United States for evangelization to them and after that he has visited to Japan as a missionary. Archbishop Jean-Pierre Rey at that time had hoped to build a church in the area between Shinagawa and Oomori since there was no church yet. So Fr.Father Breton (the First Pastor Priest) from the Paris Foreign Mission Society had rent a company owned house at Ooimachi by the help of entrepreneur in Osaka for free. On 28th of August in 1921 together with two Sisters of Visitation have started Fr. Albert Breton has started the mission works of kindergarten and medical clinic. People of the area gathered at the small chapel of the house. As the mission of the Sisters has grown the house became very narrow the land facing the main street toward JR Oomori Station and Keihin Yawata Station has been purchased. In 1928 the new chapel and the convent of the Sisters have been built and on 5th of February, the memorial feast day of the 26 Japanese martyrs, the big inauguration ceremony has been held by the hands of Papa Nuncio Archbishop Giardini, The new chapel was Gothic architecture and had two bell towers of 17 meters high at the both sides which stood out prominently in the Oomori town developed rapidly after the Tokyo Big earthquake. To make more familiar contact with the people in the area the lectur meetings have been held by Fr.Francisco Xavier Soichi Iwashita and Fr. Sauveur Candu, M.E.P. On 29th of May in 1937 the pastoral ministry of the church has been transferred from foreign missionaries to Japanese diocesan priests and The Mission works of the Sisters of Visitation have been separated from the parish. The St. Mary Hospital has been moved also to Shichirigahama in Kanagawa prefecture. The area of Oomori church belonged to Keihin Industrial Belt where were many military factories to increase the demand of weapons and Many young people from the local province came to work at the factories. During that time Ebara church and Kamata church have been established in the region. But as the war situation became harder and harder the mission activities of the church became difficult. The whole area of Keihin Industrial Belt has to evacuated to province and the air raid became more harder. On 29th of May in 1945 around the noon time the whole area has been attached by the concentrated incendiaries from B29 bomber and then the Gothic chapel had been burnt down together with other private houses in the area. The chapel had been burnt for 3 days and the bell towers were also melt down by the intense heat. There was a prisoners of war near by the church and Fr. Antonio Masayoshi Shimoyama, the chaplain at that time, commute the prison daily to save the prisoners. After the War they have been released and then returned to their home countries. It is very moved to know that those people have supported earnestly by big donations for the reconstruction of the Japanese churches. Oomori church became the first one to be reconstructed after the war among other churches attacked during the war in Tokyo Archdiocese. In the chaos after the war Region of Mary and JOC have been organized. Kindergarten and Boy Scout have also organized and education for children has been emphasized in the mission. In 1972 the new chapel has been completed on the occasion of 50th anniversary of Oomori church. Since the church is facing the main street people and cars are passing by hurriedly everyday in front of the church. The church stands out in the town and continues to shine t he light of Christ. （Monthly News of Archdiocese of Tokyo in Nov. 1992）

The statue of Our lady of Rehan, the patron saint of Argentine

In 1948 Autumn Mr. Amerigo Gera, a Argentine trader has brought the statue to Archbisjop of Tokyo from Archbishop Santiago Luis Covelt of Buenos Aires and Oomori church has received the statue as a forerunner of reconstructed church after the war. On 5th of December in 1948 , the day of the dedication of the Oome Church, the ceremony of installation of the statue of Our lady of Rehan has been held.

The church bell of annunciation

The bell had been given from Pope Pius 11th in 1930 to Archbishop Giardini, and it had been blessed by Archbishop Jean Alexis Chambon. Then it had been given to Fr. Sauveur Candu the president of Tokyo seminary. After the war a parishioner has found it among the piled scrap of metal and iron at the ruins of fire in a corner of Keihin Industrial area and reported it to Fr. Masayoshi Shimoyama, the 6th chaplain of the church,. It was proved the church bell of annunciation and Fr. Shimoyama got the permission from the Archbishop Peter Tatsuo Doi to use the bell at the church which was highlighted as a first reconstructed church after the war. On the day of the dedication mass of the church the bell was rung its beautiful sounds of annunciation.