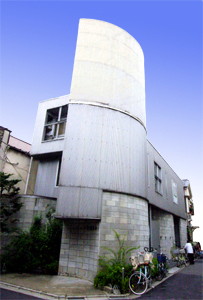 The seeds of the Divine Words had been brought to this Machiya area by Fr. Hugo-Makibi Enomiys-Lassalle in October 1931. At that time there were so many sufferers from The Great Earthquake in Kanto Area and the Social Bureau had marked Machiya as the most needy area in Tokyo. It is easily to imagine that the special Mass for the recovery of the sufferers had been offered at an almost ruined house along the present Otakebashi Street. The Sophia Welfare House run by the Society of Jesus was transferred to the present place in 1931. On 10th of October Fr. Alois Michel, German S.J., had been assigned into the Church in 1935 and then he has made the foundation of the present development. Because of the WWII the whole Church building was reduced to ashes and the Church had to start again from the very beginning. After the war the Church has welcomed several priests. Fr. Alois Michel S.J., Fr, Kenichi Kaise S.J. and others had been assigned as the chaplain. Students of Sophia University and the Sacred Heart School Institute also supported as volunteers. Fr. Fusasaburo Yamashita, the monk of Trappisit Abbey, had stayed the Church as a guest during his study in Tokyo from 1967 to1969.In 1983 Fr. Kaise had returned to the Church and Fr.Fr. Alois Michel’s golden jubilee was celebrated. But the time of confusion which the foundation of the Church shook had just begun. In1980 the congregation of the Sisters Immaculate Heart of Mary of Nagasaki who had been invited to the Church by Fr. Michel to work for child education, was fixed to transfer to the Shakujii convent attached to the Retreat House of the Society of Jesus due to the decision of the provincial management. This news was a bolt from the blue to the Church members. After that the problems on employment within the business body and some confusions in the Society of Jesus complicated the whole situation of the Church, which lead almost to terminating the function of the Church. In order to reorganize the Church, Fr. Juntoku Kohno S.J. had been assigned as the chaplain and he had tried his best dedicating his whole life to settle down the confusions and solution on the court of justice. After his death several Jesuit priests had been sent to offer the Sunday Mass for the Church but they could not have so much effect on the pastoral work that the Archdiocese of Tokyo have taken over the position of pastoral care from the Society of Jesus. After 62 years long way since the Church had been started by renting a room of the Sophia Welfare House, in April 1993 the land of the Sophia Welfare House has given at last to the Archdiocese of Tokyo for Catholic Machiya Church and the Church could have own chapel which has opened the new way on evangelization. Also the environment of Machiya area has changed a lot. The Church should seek the new way of evangelization searching the needs of the people in the area. Thus along the way lead by the Pope and the Bishops together as one heart the Church will continue to preach the Gospel of the Lord.Fr. Peter Iwao Tsukamoto who had made a big effort for having the own chapel passed away on 2nd of July, 2006 and at present Fr. Antonio Fujio Izumi serves for the Church as a pastor.