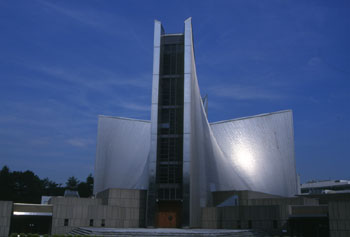 The Catholic Korean people in Tokyo have formed a regular meeting at Sekiguchi Church and participated into some limited activities like attending the Otaa Julia Memorial Ceremony at Kozu Island or erecting a big cross at Oshima Island, before the official Catholic Korean Community has been admitted by Archdiocese of Tokyo. (1951-1969) In June, 1984 Fr. Kim In Seong has been sent from Seoul Archdiocese to Tokyo and in August of the same year the two Sisters of Handmaids of the Sacred Heart of Jesus have been sent to Tokyo for the Catholic Korean Community. On October 20th, 1985 the first Korean Holy Mass has been offered at St. Franciscan Chapel Center at Roppongi. Through the Holy Mass and Liturgy at the Center the Catholic Korean members have increased and activated gradually. Then the bigger space for the Korean Community has been required. In 1990 during the time of Archbishop Peter Seiichi Shirayanagi the Catholic Korean Community has been moved actualy.from Roppongi to St. Mary Tokyo Cathedral. The Holy Mass has been offered at St. Mary Cathedral and two office rooms have been shared to the community on the 2nd floor & 2 rooms on the basement of Sekiguchi Church. After that by the prayer and consideration of Archbishop Peter Seiichi Shirayanagi and the group of priests the community has been developed daily. From 2008 the interior renovation of Catholic Center has been taken and it has been completed in February 2009. By the consideration of Archbishop Peter Takeo Okada the 2nd and 3rd floor have been shared to the community for long term. On the 22nd of February the thanks giving Mass and blessing of the newly renovated rooms of Catholic Korean Community have been held at Catholic Center. Until today’s stable situation the Catholic Korean Community has made a big development by prayer and consideration by the Bishops, priests and lay people. All these blessing has been given by the grace and love of Our Lord who has been watched over for this community, we do believe. Tokyo Korean Church expresses our gratitude for the favor of Archbishop Peter Takeo Okada and the group of priests and lay people, and offer our prayer daily for the expansion of evangelization on the Good News and Love of the Lord to all over Japan. The successive priests of the Church from the beginning were : Fr.Kim In Seong (Jan. 1985－Jun. 1990), Fr. Lee Ki Hun (Jun. 1990－Sep. 1995), Fr.Choi Ju Ho ( Sep. 1995－Oct. 1997), Fr. Lee Won Gyu (Oct. 1997－Aug. 2003), Fr.Ju Kyoung Soo (Aug. 2003－Feb. 2007) Tokyo, Fr.Kim Kwang Sik (Feb. 2007－Feb. 2012),  Fr.Lee Hae Wook (Feb. 2012－Nov. 2014), Fr.Oh Dae Il (Nov. 2014－Mar. 2015,Parochial vicar), Fr. Lee Chang Jun (Mar. 2015 – Feb. 2020), Fr.Koh Chan Keun (Feb. 2020 – Today).