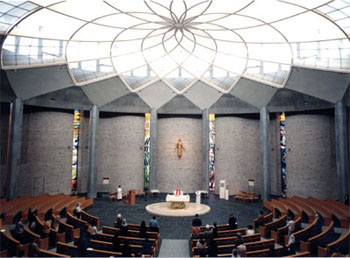 Masses in Japanese （All in Main Chapel)

Weekday Mass (All in Japanese):

On March 22 in 1936, after the Discalced Carmelite Sisters moved to the Kami Shakujii area, Archbishop Chambon had dedicated St. Thérèse Catholic Church at 1- 10 Rokuban-Cho in Chiyoda Ward. Fr. Yoshigoro Taguchi ( former Cardinal and Archbishop of Osaka) was assigned as the first chaplain.

On May 25, 1945, the Church was burnt out and the chapel in the Kulturheim was used for the Mass of the Church. From July 1947 the Mass had been celebrated at the auditorium of Sophia University.

On 26 August, 1947, the pastoral care of the Parish at Kojimachi has been entrusted to Society of Jesus. Fr. Helman Heuvers was assigned as the first chaplain.

On 2nd of December the Church construction had been started and the name of the Church was changed to St. Ignatius Church.

In 1948, the Church became the perpetual parish entrusted to the Society of Jesus. (Parocia Religiosa Permanens )

In 1949, the dedication ceremony mass of the Church was offered by Archbishop Peter Tatsuo Doi. The Number of Parishioners was 1,200. Celebration of the 400th anniversary of St. Francis Xavier’s arrival in Japan has been held. His holy arm and his small cross were displayed for three days. 7,000 people had joined the first Eucharistic Assembly after the WWⅡ.

In 1950, Archbishop Peter Tatsuo Doi and Apostolic delegate, Archbishop Maximilian de Furstenberg had given the sacrament of confirmation to 206 people for the first time at the Church.

In 1952, the wooden one storied house of St Ignatius Hall had been built on the floor space of 45 Tsubo. Formal diplomatic relations between Japan and the Vatican has been established . Archbishop Maximilian de Furstenberg had elevated to the rank of apostolic internuncio. In 1956, the three bells of the belfry have consecrated and named each as the bell of St, Ignatius, Sophia, and St. Thérèse and started ringing from 31st of August.

In 1959, 10th anniversary of the Church has been celebrated. In 1960, Archbishop Peter Tatsuo Doi became the first Japanese Cardinal and the celebration was held at the Church with 1500 people. On 15th August the pipe organ made in Netherlands was installed and played for the first time.

In 1962, Celebration of the 100th anniversary of the re-establishment of the Catholic Church in Japan has been held (at Yokohama). The first session of Vatican II has been started.

In 1963, Pope John the 23rd had passed away. Japanese Prince Akihito attended the Solemn Funeral Mass at Vatican on behalf of Showa Emperor Hirohito. Pope Paul 6th has been elected as the new successor of the Holy See of Vatican.

In 1964, 15th anniversary of the Church has been celebrated. St. Mary Cathedral of Archdiocese of Tokyo has been newly constructed and dedicated by the support of Cologne Archdiocese in Germany.

In 1965, the stained glass which has been made by Mrs. V. Hand with the design of the stations of the cross had been sent to the Church. Confrontation between Catholic Church and Orthodox Church had been reconciled after 900 years silence.

In 1966, the position of the alter in the Mass has been changed to facing the audience. Fr. Helman Heuvers became a honorary chaplain and then Fr, Johannes Bezikofer was assigned as the second chaplain.

In 1967, the first church bazaar was held ( the lottery ticket was 100Yen, the first prize was a color television set). Candle service was held on the Christmas Eve.

In 1969, 20th anniversary of the Church. Fr. Helman Heuvers was invested with the second Order of the Merit and Fr. Theodor Geppert was invested with the forth Order of the Sacred Treasure. St, Ignatius Assembly Hall had been built in the Church yard. The explanation meeting of the liturgy in Japanese was held. The space shuttle Apollo 11 had landed on the moon successfully.

In 1971, receiving Holy Communion by hands has been instructed. Reserving fund for the chapel construction had been started.

In 1972, a book shop with information desk run by the Daughters of St. Paul Sisters has completed in the Church yard. Greeting of peace has been started in the Mass.

In 1974 the sign of peace started practicing during the liturgy in Holy Mass. In December the first pilgrimage to overseas headed by Fr. Dominicus Hiroyuki Ikejiri visited Vatican and attend the ceremony of opening the front door at St. Peter’s Basilica of Vatican in the Holy Year.

In 1975 Fr. Bruno Bitter was invested with the third Order of the Sacred Treasure. Fr. Petrus Joji Yamamoto was assigned as the third chaplain. The first domestic pilgrimage headed by Fr. Luis Cangas visited Tsuwano.

In 1977 the first orientation of the Church was held and 150 people attended. Fr. Helman Heuvers who was the first chaplain and the second president of Sophia University was past away.

In 1981 mass with finger interpretation has started. The first folk mass has held. The committee of inquiry for the Church new construction had been settled. Pope John Paul II has visited to Japan for the first time in the history. Mother Teresa visited to Japan.

In 1982 Fr. Luis Cangas was assigned as the fifth chaplain. The small chapel of At. Francis Xavier was consecrated.

In 1984 St. Thérèse Hall was consecrated. Three thousands people attended the lecture meeting of Mother Teresa arranged by Shinwa Kai in her visit to Tokyo.

In 1991 As the result of contesting 6 designs for the new church made by construction companies Itakura Construction Design Office was chosen. Yamaguchi St. Xavier Chaple was burnt down at Yamaguchi City.

In 1995 the first term construction had been started by the joint operation of Shimizu & Takenaka construction companies.

In 1997 the last ordination ceremony of the priesthood at the old chapel was held.

In 1998 the the first term construction had been completed and the ceremony of transferring to the new chapel was held. The ceremony for the completion of the construction and the dedication of the new Chapel were held. Fr. Dominicus Hiroyuki Ikejiri was assigned as the 6th chaplain. 450th Anniversary of St. Francis Xavier’s Landing to Japan.

In 1999 the second term construction had been completed and he dedication of the new Chapel were held. The first retreat for the whole Church members was held.

In 2000 the pilgrimage to the Holy Land was organized officially and sent for the Holy Year.

In 2003 on the reorganization of regional evangelical group in Archdiocese of Tokyo, the Chuou Chiyoda cooperative group of evangelization was newly born with Kanda Church, Tsukiji Church and Oshima Church.

In 2005 Fr. Josephus Koichi Matsumoto was assigned as the 7th chaplain.