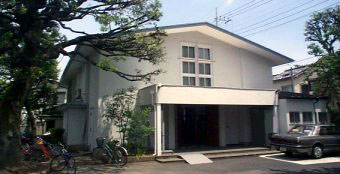 After Sunday Mass, twice a month (For Elementary School Children)

In 1954, the Church has been started as a sub-parish of Honjo Church with only 30 people at the beginning. The present chapel has been constructed with the financial support by Cologne Archdiocese in Germany and completed on 5th of May 1958. The Church has been dedicated to St. Boniface as the patron Saint. In 2008 the Church has celebrated the 50th anniversary. He has been called as the Apostle of Germany because he had converted the Germanic Race into Christians, organized Churches in Germany, strengthened the ties between Holy See and Frankish Churches, and thus founded the foundation of West European Culture. He was ordained to bishop at Rome in 722. The symbolic mark of Koiwa Church is a oak tree & an ax which originated from his evangelical work at Frilzlarin in northern Hesse (Holland). In 724 he had cut down an oak tree, which pagans had believed that the spirit of the thunder God, Thor, had welled within the oak tree. People watched with breathless attention if St. Boniface would be punished by Thor’s anger but nothing happened to him. After that they were disillusioned from the superstition and respected him. From that experience many people had received baptism one after the other. On the 5th of June, Pentecost Day, in 754 St. Boniface was in Frisian Island with 52 missionaries and worked for the converts in forefront and then the heathens had fall up him and murdered him together with other missionaries. On the 5th of June the Church has celebrated the feast day of St. Boniface every year. In June 2009 the remains of St. Boniface have been presented to the Church from Cologne Archdiocese for the memorial celebration of 50th anniversary of the Church in 2008 and enshrined in the chapel on 7th of June 2009 by Cardinal Peter S. Shirayanagi.

The Church is located at Nishikoiwa, Edogawa Ward in a corner of east district of Tokyo where people have lively spirit and human touch as their character of downtown. The Edo River which is a border between Tokyo and Chiba prefecture flows gently into the Tokyo Bay. This area has some famous and literary spots like “Shibamata Taishakuten Temple” in the movie story of “Torasan Series”, and the Ferry of Yagiri where was the scene in Sachio Ito’s novel ” The tomb of the wild chrysanthemum”. As the Church in downtown it has also warm family like atmosphere and Regina Kindergarten of Archdiocese of Tokyo adjoined there. Regina Kindergarten has applied Montessori Education Method which has the policy of “developing liberal idea and free-will “. Encouraged by the approval and consent of neighboring communities and inhabitants of the area, all the staffs of the kindergarten give their best efforts for the children’s education and keep close friendship with their parents. There are convents of Assumption Sisters and Missionaries of Christ Jesus near by and they belong to the same Church community. ( Social Communications group of Koiwa Church)