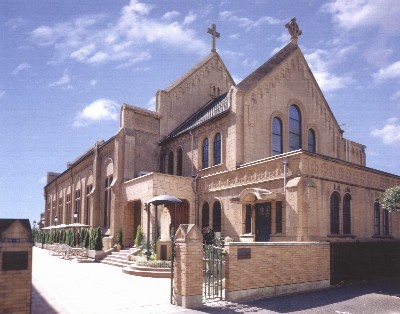 As the Tokugawa Shogunate in Edo era had issued the edict forbidding Christianity and persecuted Christians, the Meiji government also had forbidden Christianity in early time. But Paris Foreign Missionaries who had made inroads of foreign settlements into Tokyo had built a Latin Language School at Sanban-Cho in 1872 under the name of teaching foreign languages to provide a seedbed of seminary to educate Japanese priests for the near future, before the time when the Meiji government will accept Christianity and evangelization of the Church will come. On February 24, 1873 the Meiji government al last had issued the Abolition of signboards proscribing Christianity which was the tacit approval of Christian evangelization . In January, 1874 Paris Foreign Missionaries had purchased three houses owned by the direct retainers of Shogun at Kanda and moved from foreign settlements. They built a chapel made of 70- mat tatami room and dedicated it to St. Francis Xavier. That chapel became a foundation of the present Catholic Kanda Church. In 1878 the seminarians who were in Kanda language school had moved to the Seminary in Nagasaki and Fr. Alfred Pettier was assigned as the first chaplain of the Church. The Church had entered the new era of Christianity in Japan. In 1896 the chapel had been newly built but it had been burnt out by the big fire in 1913 and the new chapel built in 1923 also had been totally destroyed by Kanto Big Earthquake. The present chapel has been constructed by ferroconcrete ( partially steel frame) in 1928 and it was remained safe during the Tokyo large-scale Air Attack in 1945. In 1953 the Church was renovated once to be a pro-Cathedral of Tokyo Archdiocese. The Church has 140 years history since its start and is the second old parish in Tokyo after Tsukiji Church. Fr. Junichi Ebe is the 15th chaplain now counting from the first chaplain, Fr. Alfred Pettier.