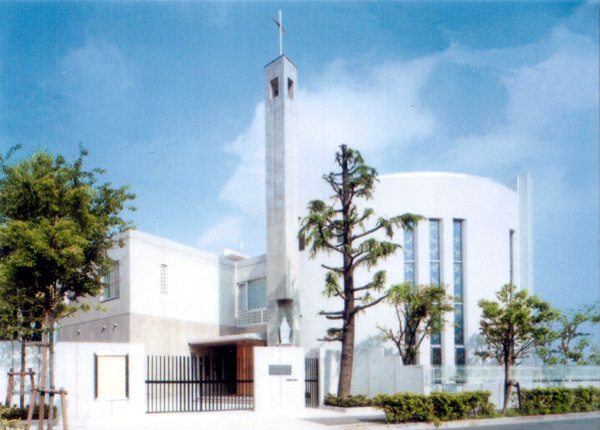 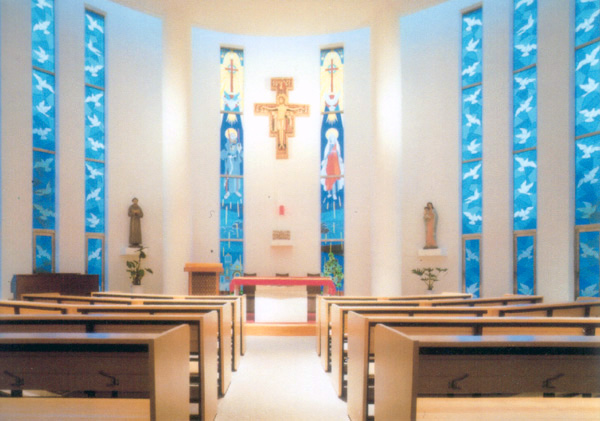 Weekday Mass (All in Japanese)

15 minutes walk from North Gate of JR Kameari Station. Take the bus bound for Oyata-shako from west gate of Ayase stn, get off the bus at Towa2chome,3min. walk from the stop. Parking available. GoogleMap

The Church is located in north-east of Adachi Ward in Tokyo. On the occasion when a religious house and a kindergarten were established by the Conventual Franciscan Missionary in December, 1955, the direct ancestor of Catholic Kameari Church had been started using the auditorium for both Franciscan Missionary and kindergarten as the chapel of the Church. On August 1957 it had become the sub-parish under Mikawashima Church in Arakawa Ward. After 14 years the church has been admitted as a parish of Archdiocese of Tokyo in 1971. First the chapel was at the auditorium of Franciscan’s kindergarten, next at a prefabricated house and at last an awaited new chapel of the Church has been built and dedicated by the united cooperation of the parishioners and the support of the Franciscan Missionary in 1991 together with the religious house of the Franciscan Missionary. As for the kindergarten it had joined the educational foundation of Nikawa Educational Institute of Conventual’s Franciscan Missionary in March 1958 but it has been separated in 1990. After It led three kindergartens, St. Francis Kindergarten, the Militia Immaculata Kindergarten, St. Maria Kindergarten, to organize and start newly as the educational foundation of St. Kolbe Educational Institute. The Conventual’s Franciscan Missionary ( Friars Minor) has been founded by St. Francisco of Assisi who used to be called ” The poor of Assisi” and his Community has been approved in 1209. During the time of St. Francisco in 13 centuries secularization had been spread among those who were away from Christian belief in church, lay people and even clergymen. He felt the necessity of re-building the new church by returning the original Christian spirit. It was based upon the voice from the holy cross at St. Damien Church that he heard ” you should rebuild the falling church.”. The spirit of St. Francis of Assisi, live poor in spirit and love one another, attracted many young people who and the missionary has been developed great deal by receiving them. On the 3rd of October in 1226 he had closed his 44 years life on earth praising the Lord with psalm in his many disciples who were watching over his last minutes beside him. The first Conventual’s Franciscan Missionary who had started the mission in Japan was Fr.Maximilian Kolbe. Fr. Kolbe took Brother Zeno Zebrowski and Brother Hiralio with him when he had arrived at Nagasaki in 1930 for the first time. One month after he had started in May he had published the first edition of the catholic magazine “Militia Immaculata ” in Japanese. In 1931 he had built the house named ” The garden of Immaculate Mother” at Hongochi in Nagasaki for the printing office and the monastery.. Since then it has become the head quarter of mission operation. After his 6 years work there he went back to Poland in 1936. After that German Army had invaded Poland and the 2nd World War had been broken out. Fr. Kolbe had been arrested twice by Nazi, German Army. At the second arrest he sent to Auschwitz. He had born the inhuman torture in the prison and then he laid down his life for another man who had been sentence to dearth. In August 1936 Fr. Kolbe, aged 47, had been martyred in Auschwitz in dehumanizing and brutal world of the Nazi. . The life of Fr. Kolbe had been dedicated to the Lord with various activities based upon the spirit of St. Francis of Assisi and Our Lady being appeared with deep devotion to Her. Fr.Maximilian Kolbe has been canonized by John Paul II in 1982.

The Catholic Kameari Church has been dedicated to St. Francis of Assisi and has driven mission activities and pastoral work with religious life along the spirit of St. Francis. In May, 2001 the Church has celebrated 30 years anniversary of the Kameari parish and also 10 years anniversary of the consecration of present chapel. With only 30 members the Church has been started and now grown up to 390 parishioners who are walking with the faith as the family of St. Francis of Assisi     ( Reference: Catholic Tokyo News in March 2004, by Mr. Susumu Nishimaki)