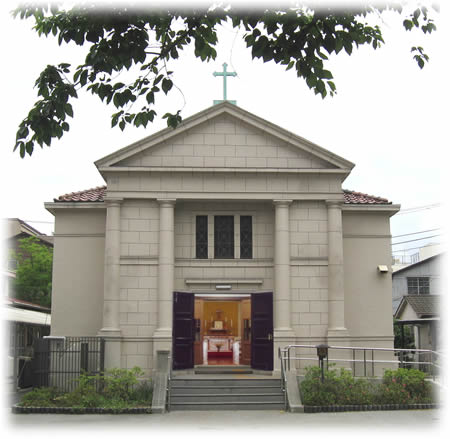 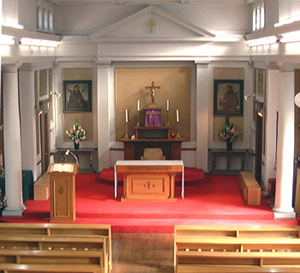 Charity activity to the support group for homeless people, “TENO HASHI”, by sending them clothes.

From the North gate of Kinshicho Station on JR Soubu Line Take Toei Bus heading for Otsuka-mae from JR Kinshi-cho Station and get off at Ishihara 3 Chome Stop. 3 minutes walk from the stop. GoogleMap

Father Urbani Faurie, the assistant Priest of Asakusa Catholic Church, purchased a large area in Yokokawa 74 banchi , the site of the present church, in order to build a church building for increasing numbers of the lay people and catechumens in Honjo and Asakusa area. In April 1880, the Church building had been completed. On 11th of April Auxiliary Bishop Félix Midon had settled the new church as the forth parish of Tokyo prefecture dedicated to The 26 Martyrs of Japan as the patron Saints and had consecrated the new chapel. During this time Fr. Urbani Fauri had been out of Tokyo sent to Hokkaido for his mission. Then Fr. Julien Langlais, the chaplain of the new Asakusa Church had to carry on two big communities in the large area which are Asakusa church and Honjo Church. With the help of Sisters of St. Paul the Chartres, and active volunteers Fr. Julien Langrey could carried out his pastoral work. But at last he got sick due to the over work and then had be transferred to Hokkaido. His successor was Fr. Augustin Tulpin who had been active pastor in Niigata and Yamagata districts. After Fr. Urbani Faurie got well and came back from Hokkaido, he was assigned as the director of the orphanage in the same site of the Honjo Church. But soon after he had to leave for Hokkaido again. In 1885 Honjo Catholic Church became independent from Asakusa Curch and Fr. Etienn Balete was assigned as the first chaplain and the Church became alive again. It is said that the Church was a little bit far away from the central area of Capital Tokyo and then the church had experienced straightly the big waves of turbulent changes in Meiji era which was the time of new democratization in Japan. After the Europeanization policy had passed by in Japan, the country had gradually entered into the way of militarism and the government authority felt discontented day after day against foreign countries related to The Triple Intervention and the problem of coal supply for the Baltic Fleet. In 1905 at last the discontent of Japanese mass had burst into a rage against the Japan / Russian Peace Treaty. The mob who roused them to actions at Honjo area had attacked Honjo Church and then the church had been burnt down together with the private houses of the church members in all over Honjo Area. Even after the suppression of this riot, the hostility of the mass against the Church had remained and it had given Fr. Etienn Balete torment for long time. Archbishop Pierre Marie Osouf considered the times in Japan and then changed the chaplain of the Church from French Missionaries to Japanese diocesan priest, Fr. Paul Yahei Kunisada born in Ashikaga of Tochigi prefecture. After the arrival of Fr. Y. Kunisada at the post the Church had gradually bought back peace again. In 1909 Fr. Michael Shohei Honjo who became the third chaplain had rebuilt the Church which had been destroyed completely many times by Kanto Great Earthquake, Kanto Great Flood, and World War . He focused his efforts on formation of the Church lay members. Fr. Antonio Masayoshi Shimoyama, the fifth chaplain from 1949 had made tremendous efforts for recovering the Church after the world War II. In 1951 the present new chapel have been renovated. The Church regain the active energy. In 1996 Fr. Antonio Masayoshi Shimoyama has passed away. Looking back upon the past when there was lack of missionaries for parishes, Honjo Church in Asakusa district had to bear the difficult times when the chaplain had to be changed frequently and there was no deacon to support him. But the number of the parishioner and catechumens had been increased gradually, and the Church had developed to one of the biggest parish in Tokyo. The Church had experienced total destruction several times and yet never lost their efforts towards new reconstruction. Behind these devoted spirit, there had been always a wonderful cooperation among the chaplain and community members of the Church, which has been succeeded up to now. ( Reference material: Tokyo Archdiocese News No.83, May, 1991 )