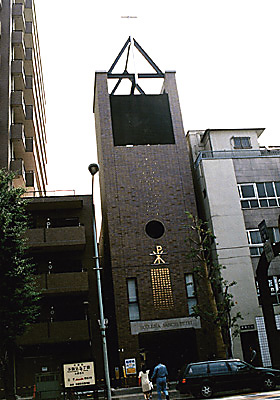 Weekday Mass (All in Japanese)

Sunday School (All in Japanese)

“Bible Study Gathering” Sunday after the Mass: 10:45am -11:45am (Introduction to Bible Study) at the seminar room in the hall building.

Elevator, Toilet, Facilities for Hearing, Wheel Chairs (a loop antenna is set up inside the church building)

Archbishop Jean-Pierre Rey gave the high priority on rebuilding the churches damaged in the Kanto Big Earthquake attacked in 1923. The tentative chapels for emergency measure had been changed gradually into newly built chapels. At the same time, considering the necessity of establishing new parishes, he sold the land in Tsukiji to buy other land in Hongo, Koenji, Omori and Kojimachi. On March 29 1927, he purchased the property of the former peer’s Residence at Hongo Kamifujimae Chou. Archbishop Rey thought that Japan will owe much to the young generation in the future and then they will be a hope in giving their influence to the coming new society. He looked for a land in Hongo where many young students lived. He remodeled former Peer’s Residence into a new chapel, parsonage, community hall, and assembly hall, and then he himself commuted from Sekiguchidai to the building site in Hongo bringing his own lunch daily and gave instruction at the reconstruction field.

On June 1st ,1927 Catholic Hongo Church have started with the official permission of new church establishment by Governor of Tokyo Metropolis and be born on 18th of December with the St Peter as the patron saint of the church. The Hongo church was the 7th parish church built in Archdiocese of Tokyo counting from Tsukiji, Kanda Asakusa, Honjo, Azabu and Sekiguchi. Archbishop J.P. Rey had moved from Sekiguchidai to Hongo Church for the pastoral care of newly born Church. After the new appointment of Arcnbishop Jean-Baptiste-Alexis Chambon as Archbishop of Tokyo, Archbishop Rei became a chaplain of Hongo Church officially. The atmosphere of the Hongo Church in early times of 1930 decade, was warm and alive with homely intimacy and people were united in earnest prayers lead by Archbishop Rei.

Among the members of the church there were many highly educated university faculties including Mr. Kotaro Tanaka who was the future president of the Supreme Court ,and young students who gathered around these big seniors with the atmosphere of young spirit and culture. Until 1937 priests of Paris Foreign Mission had worked for pastoral care of Hongo Church by turns. But since China- Japan War had broken the phase of Japanese society became serious against foreigners. Then in order to pastor the Catholic Church in the war time, Archbishop Peter Doi had been inaugurated as the first Japanese Archbishop and Archbishop Jean-Baptiste-Alexis had resigned. Also the chaplain of Hongo Church had moved from foreign missionary to Japanese diocesan priest. During the second world war the people of Hongo Church had been united in calm mind, kept homely intimacy with prayer and always worked hard for evangelization, while policemen and military soldiers had examined the church from time to time. By the Tokyo Big Air Raid attacked on April 14 , 1945, the chapel which had remained a historic Japanese architecture of Samurai’ residence , the parsonage and other buildings had been reduced to ashes. The private houses of the church members also had been damaged too but they helped each other to make effort for rebuilding their church building.

On June 23rd, 1996 the new chapel, parsonage and hall have been completed. The chapel has three stories fronting the Hongo street. The Rei Hall named commemorating Archbishop Jean-Pierre Rei is a real hall with 200 seats and is fully equipped for multiple purpose and concert. Music concerts have been performed often there. There is a loop for handicapped people in the chapel.

Hongo Church located in the central area of metropolitan Tokyo in Japan which has big economic power may grow to be more open to respond the need of the people around and develop in the way to God. (From Catholic Tokyo News Vol. 97, Oct. 1992 )