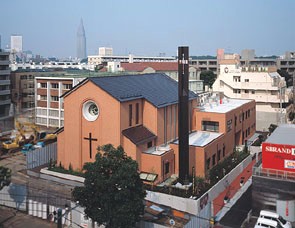 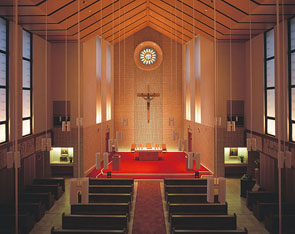 From 8:30am Mass to 10:30am, for Elementary Children and Junior High School Students.

Please ask to the information of Hatsudai Church

The Redemptorists (The Congregation of the Most Holy Redeemer)
http://www.cssr.or.jp

History In 1948 the first missionaries of the Redemptorists from Canada who worked at Kamakura area as pastors came to Tokyo and have started their mission at Hatsudai. A warehouse remained unburnt from war fire was used as the first church and monastery. One year later in 1949 the youth group was started and the first bazaar was held. In 1951, the Redemptorists moved from the Taito District to Hatsudai and built a monastery. In 1954 the St. Joseph Kindergarten has started and the first parish news letter “Magokoro” (sincerity) has been published. Thus lead by the spirit of the founder, St. Alfonsus Maria Liguori , the Church has been developed rapidly. In 1956 the Htsudai Church has been separated from Setagaya parish and became independent as Catholic Hatsudai Parish. On the morning of August, 1959 the newspapers reported the death of one foreign missionary, Rev. Fr.Louis- Philippe Levesque CSsR. who has been dedicated as the first chaplain of Hatsudai Church and overcome many difficulties with full of love for building up the mission in Japan as the vice provincial of the Redemptorists. We never forget him who has lead so many people to the Lord through his zealous pastoral work. Present Situation The Church is dedicated to St. Alfonso Maria Liguori and it is located near the Shinjuku sub-center of Tokyo metropolis along Yamate Road. The Redemptorists Tokyo Vice-provincial House and the Major Seminary are adjoined in the same Church yard. With the spirit of St. Alfonsus Maria De Liguori, 5 priests pray, meditate, and teach the words of God through Catechetical study and Bible class. The active support of the community people sustain the various activities, and the youth group voluntary takes care of Children’s Sunday School in which they organized Children’s finger languages group.  The former chapel was dedicated in 1964 but it has been broke up in June 2001. In 2002 the new chapel has been constructed. The founder of the Redemptorists, St. Alfonso Maria Liguori, had composed many musical songs and he taught people with the songs, which gave many influence among the Hatsudai Church activities. After the second Vatican Council, when the liturgical language changed from Latin to the mother language of each country, it is remarkable that Mr. Saburo Takada who was a lay member of the Church taught the choir, composed many Japanese hymns and thus he made a foundation of Japanese Catholic liturgical songs. From 1975 folk mass has been started. It became popular rapidly and music band was organized well. In Feb. 1981 on the Pope’s Mass at Korakuen Stadium in Tokyo, our music band served to play for final songs during the first visit of Pope John Paul Ⅱto Japan. This experience has been kept deeply in our memory. The band serve twice a month for Sunday Mass for long time and celebrated 25th anniversary Mass in 2000. After the half century from the start, Roger Provencher is the 14th chaplain and the present chair of the church committee is the 17th. The old chapel has received many newly baptized members, but due to various matters it had been broken up. On 2004 the new chapel has been built and the first mass was offered on the August the 1st. The dedication Mass of the new chapel was celebrated on Sep.16th by Archbishop Peter Takeo OKADA. At present the total number of the faithful is more than 1,200.The children and youth are actively involved the community programs. As the home place of the new mission in 21st century, we wish the church may develop further in the love of God. ( Reference: Catholic Tokyo News Letter Vol. No.181, April 2001)