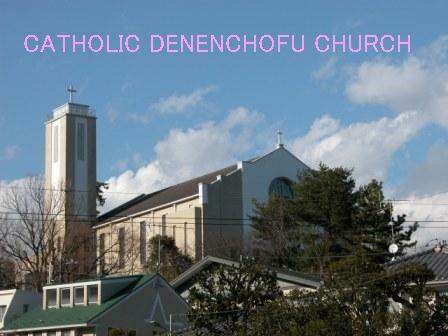 Sunday Mass (All in Japanese):

Parking available for total of 30 vehicles. Please take public transportation if possible.
GoogleMap
Parish History
History
Archbishop Chambon requested the Franciscans ( from the District of Canada) to start missionary work in Dennenchofu. In1930 the church services were started at a rented Japanese house. On the feast day of St. Francis of Assisi, 4th of Oct. in 1931, the present Catholic Dennenchofu Church was dedicated by Archbishop Chambon on the present site and the parish was founded. Since then the Franciscans had taken the pastoral work. The patron saint of the church is St. Francis of Assisi and then the church has been called as St. Francis Church. Within one year from the start the number of parishioners had been increased to 165.
On March in 1934 the church committee had been organized, youth group had been started and they had joined the youth federation of Tokyo. The youth group had served for catechetical class for children and book sale.
Study programs were held often in the church. In May of the same year
women’s group had been organized. In 1936 the provincial house had been moved from Kagoshima to Tokyo and the mission activities in Tokyo had been reinforced. The number of parishioners continuously had been
increased up to 390 and during the mass the chapel became very crowded with overflowing people. The chapel had been enlarged and it had been
completed on July in 1937. The mission works were gathering strength.
But on 8th of Dec. in 1941 Attack on Pearl Harbor by Japanese Army had out broken and all the circumstances had been totally changed.
Foreign priests were arrested as enemy alien and taken to the prison.
Fr. Inayou, only one Japanese priest, remained alone protected the Church during the dangerous difficult time of War.

In summer of 1944 the Metropolitan Police Office took over the church building and it was used for house arrest of the personnel’s of Italian Embassy which was separated from Axis power. Fortunately the house of Mr. Meguro was offered to the church for temporary use and then the church was moved to Mr. Kitazawa’s house opened to the parishioners.
On August in 1945 the War had been ended after the long time of perseverance and the church had been revived again at the present place.
The name plate on the church gate was made new as Catholic Denenchofu
Church. The parishioners who had been away from Tokyo to a remote evacuation or enlisted in an army had returned gradually. People who had suffered war damage also in other parishes had come back. They all together became a big number and exceeded before the War. For the mean time new visitors to the church for catechetical class and newly baptized people were increased. The chapel were full on the Sunday Mass held three times a day. The number of parishioners were about 1,500.
After 70 years from the start, the church became the third biggest church among other parishes in Tokyo Archdiocese.

Present Situation
The present building has been built in 1955 which has a hall and meeting rooms on the first floor, and main chapel for 500 sheets on the second floor. In the church yard there is a monastery of Franciscan Missionary where always several priests and brothers live. They serve as pastors for the church community together with church committee members. The Church organized several groups for the total activities of the church like, liturgy, treasure& finance, vocation, environment, public relations, evangelization, home gathering , choir, Sunday school,
Bible study, Boy Scout & Girl Scout, etc. The church is located at the residential area and many children, youth and families live there. The priests being engaged in pastoral work are also young and full of vitality.
At present Bible study, catechetical class and reading Encyclical letter of
Popes are quite active and also especially it is focused on formation of
lay people.