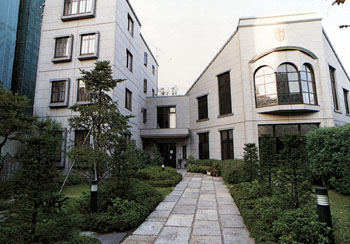 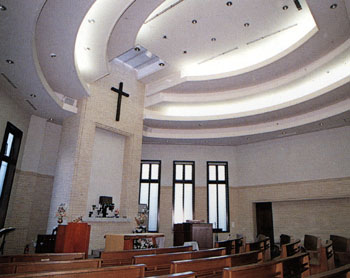 [From JR Sobu Line “Asakusa Station”.- west gate] Go left side after the exit of Asakusabashi Station on JR Sobu Line and pass in front of the Chinese restaurant ” Oshou of fried dumpling” then turn right at the crossing beside the convenience store AM/PM, go straight on . Turn left at the 3rd traffic signal of Shinobugaokakōkō Iriguchi. Go straight about 150m and you’ll see the Church on the right. About 8 minute walk from the Asakusa Station. [From Asakusabashi Sta. of Toei Chikatetsu Asakusabashi subway line] Go straight after going out from the exit A4 and turn left at the third street. Go straight and passing by the second traffic signal of Shinobazu Koko Iriguchi the Church is the right side at 150meters ahead. It takes about 10 minutes from the station. 2 traffic lights, pass 2 blocks and turn right. Go straight and pass 3 traffic signals. You’ll see the church about 100m ahead on the left. About 10 minute walk from the station. [From Akibahara Sta. of Hibiya Tokyo Metro Subway Line] Go straight after going out from Akibahara station Exit 1 on hibiya line. Passing 2 traffic signals and turn right at the second street and go straight. Passing by the 5th traffic signal. The Churhc is on the left side of CS tower about 50m ahead. It takes.about 10 minutes walk from the station. GoogleMap

At this time of writing the history of Asakusa Church, it is necessary to mention about the first evangelization in Edo period during the feudal age. On the condition that Christian Missionaries should support the trade policy of Tokugawa Shogunate, the highest political authority of Japan that time, Fr. Geronimo de Jesus, Franciscan, got a permission to start his evangelical activities in Edo. In 1599 he had built a chapel for “Our Lady of Holy Rosary” and his monastery with four lay people from Kyoto inside the Edo prefecture, around the present location of Hacchobori or Nihonbashi. After his death his mission had been carried on by Fr.Luis Sotelo based on this chapel as a center of evangelization and then the mission had been expanded up to Tohoku region in the north and Kinai region in the west districts. There were more than 3,000 Christians inside Edo Prefecture. But in 1613 Tokugawa Shogunate Hidetada suddenly ordered to destroy both the chapel and the monastery on the pretext of expanding the Edo Castle. The enforcement of the law of Christian persecution became severely. Fr.Fr.Luis Sotelo and some lay people begged earnestly to build a small chapel there but this petition did not be approved by the authority. Reluctantly they built a simple thatched hut for their chapel secretly near the leprosy hospital at Asakusa about 4 Km away from Edo Prefecture. On July 29n of the same year, it was blessed by Fr. Sotelo. But this event was known to the authority and the people who directed this construction had been caught and arrested. From 16th of August in 1613, 27 of them had been executed and martyred. Beatified John Tanenobu Mondo Hara who had been martyred at Fudanotsuji on 4th of December 1623 might have been hidden at the leprosy hospital or its accommodation at Asakusa. These historical incidents had been informed in detail by the letters of SpanishThe beginning of Meiji Era and Portuguese missionaries in Japan to their mother countries, Spain and Portugal, which are indispensable historical materials to Christian study.

The beginning of Meiji Era

The Japan & France Commercial Treaty of Amity had been ratified and Edo Sea Port had been opened to foreign ships in 1862. Going together with the construction of the French style Church for French people in Tsukiji foreign residential area French missionaries had come to Japan. Of course the priests of Paris Foreign Missionary took care of French residents, but they also started pastoral care for Japanese people and had baptized them. In 1868 Meiji Era had begun but the law of Christian persecution had not yet been lifted up and then it was forbidden to build Church out side the foreign residential area. In May of 1873 (5th year of Meiji) at last the law of Christian persecution had been lifted up. By the effort of Toma Zenemon Honda who had been baptized at the Church in Tsukiji Inaribashione one house was purchased at 16 Saruya-Cho, Asakusa-Ward ( at present 3-2 Asakusabashi) near the execution ground where the old document of Edo era had recorded. Then on Pentecost Sunday of 15th of April in 1877 ( 10th year of Meiji) a school of French Language, Maikai Gakkou which means Rose School, had been started there. At one of the rooms named the small chapel of St. Paul 40 people had been baptized on the same day. The mission activities based on Maikai School had achieved tremendous result and for the increasing number of the people in Asakusa area it became necessary to build a new Church. But the place of the school was not suitable for both the priests and people and they purchased land and house at 1-15 Mukouyanagihara-machi ( at the present Asakusa Church) . On 25th of December in 1877 ( 10th year of Meiji) the dedication Mass had been celebrated at the chapel into which was reformed former gate and library. After that another land and houses had been purchased under the name of the parishioners at Yokokawa-Cho ( It became present Honjo Church), Kodenma-Cho and Asakusaumamich which was sold later, and Sekiguchidai-Cho, Koishikawa-Ward ( at present Sekiguchi Church), and they became itinerating Churches To help the busy priests the parishioners organized themselves voluntary to mobilize the Church community and to support the poor in the area. It seems that the parishioners of the Church have independent spirit strongly from the beginning. Seven years after the opening of Maikai School there were more than 1,000 Christians around the area where Asakusa parish was covering. The story behind this there must be a strong Christian community system for evangelical activities united firmly with priests and laymen. It is quite interesting to know that the start of evangelization in Edo and Meiji era had been appealed by the people of laymen and women. (Tokyo Archdiocese News No.79( December 1990) and revised in June 2009 by Mr, Hachiro Satono,: