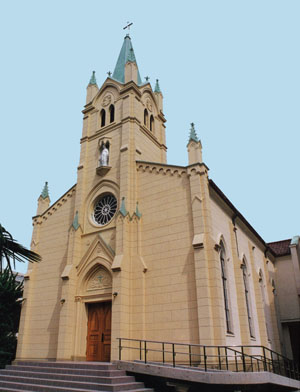 Our Lady of Assumption 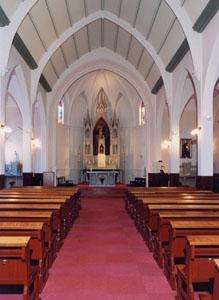 Bible Study
Thu. 10:30am Instructor: Fr.Hoai for Anyone

Before the history of Aakabane Church, let us see the first mission in Tokyo. On the condition that Fr. Heronimo de Jesus, Father M.Kolbe, having longed to found a religious house in Tokyo, they have started the mission of the Conventual’s Franciscans at an un-burnt red brick building in Akabane.

After the world war II the idea of the establishing AKABANE Church had been raised due to the urgent necessity of building seminary in Tokyo to give formation of new seminaries in new monasteries, since Conventual Franciscan missionaries had settled their mission base at Nagasaki from the beginning. For this purpose Fr. Donatus Goszinski, OFM.Conv. and Brother Zenon Zebrowski had been sent to Tokyo. They have found the land which was the ruins of the factory burnt down by the air raids of the war. Fr. Samuel Rosenbeiger, OFM.Conv. the then provoncial of OFM,Conv. in Japan purchased
it with the donation from U.S.A.

On 8th of Desember in 1947 (Showa 22) , the day of Immaculate Conception, the laying
the of the foundation stone has been taken. On the 15th of August in 1949, Catholic Akabane Church has been admitted officially as a new born parish of Archdiocese of Tokyo. Then Akabane Catholic Church was formally established with a membership of 20 lay people.In November 1951 the new chapel had been completed and the inaugural dedication ceremony to Our Lady of Assumption had been held by Cardinal Peter Tatsuo Doi. The Church has been pastured by Franciscan Conventual’s Missionary whose founder is St. Francis of Assisi, the great peace maker and lover of nature.

When Fr. Samuel Rosenbeiger saw the new consecrated Church in 1951 he wrote
his reminiscences as follows. ” This new Church seems to talk to me about love of many American benefactors who cooperated to collect donations for this Church building in spite of their frequent suffering from disease or growing senile.” in the Church memorial book of 25th anniversary. There was an employment office at that time in the Church yard but later on Knights of Our Lady Kindergarten has been established affiliated to the Church. Many children have been graduated from the Kindergarten.

The Church used to be recognized from the platform of Akabane Station but now it was glimpsed beyond tall buildings from the JR Station.
It is our proud that the Church has been chosen as one of the 100 beauty sceneries of Kita Ward in Tokyo.
In the Church garden many flowers bloom in each season and it becomes like an oasis of
the area. On the feast day of Our Lay of Assumption, 15th of August, people draw the statue of Our Lay ridden on the festival car with singing and parade the shopping streets. In such a way the Church aims at the intimacy with the people of the Akabane area.

Development
The Church bell sounds flied from bell tower and reached JR Akabane station at the Angelus time in the sky. It has been consoled the people and gave new hope to those who suffered during the war.
The Church tower could be observed from the JR railway and the people wished to visit the Church. Thus some people are lead to Catholic faith afterward.
At present the Church is surrounded by huge buildings but lives firmly in the area. It is our proud that the Church has been chosen as one of the 100 beauty sceneries of Kita Ward in Tokyo.
In the Church garden many flowers bloom in each season and it becomes like an oasis.
As St. Francis of Assisi loves nature and peace, this Franciscan family always invites people to spend a quiet time of prayer in our busy daily life. Your peace prayer in front of the statue of St. Maximilian Kolbe who had given his own life for his neighbor in Auschwitz will be answered with abundant grace from him.