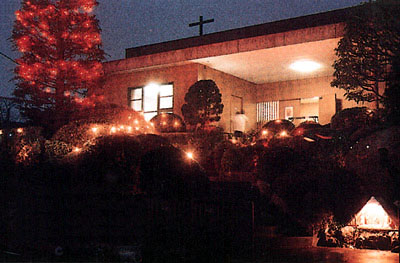 Sunday School ( All in Japanese):

History
In 1949 when the smoldering fire of world war II was still remained in several places of Tokyo, the church activities had been started by the three
Quebec Foreign Missionaries who came back from main land China in 1948. A small Japanese style house in the ruined garden, ahead of bamboo bush along the dusty road from the Tamaden Matsubara Station,
which was described in the novel of Mr. Shusaku Endo, was the first Church. A tall Fr. Boulé Roland suffered from tuberculosis before.
Fr. Parent Evariste has a good knowledge of Kanji (Chinese Character) and good voice. Fr. Blain Réal was young with blond. Those three fathers
celebrated the first mass at Akazutsumi Church and opened St. Mary
kindergarten and established Boy Scouts. In those days about 50 people and 20 Boy Scouts members attended the Sunday mass at the simple narrow auditorium. Later on Girl Scouts also established. The Church,
kindergarten and Boy & Girl Scouts had united as one body to support
each other for the development of the parish community.
Since 1960 the church bazaar had been started every year for the purpose of building the new church and the profits at the first year was 50,000 yen. In 1963 the bazaar was held with the cooperation of kindergarten and Boy Scouts on Nov. 22nd when President J. F. Kennedy was assassinated on Nov. 23rd at Japanese date. After that Girl Scout joined
the bazaar and then it became the largest bazaar in the area.
Thank to God, in 1967 the long cherished desire of building the new church had been fulfilled. In 1972 the church became a sub-parish of
Setagaya Church and it became an independent Akatsutsumi Church 1974. The last Sunday in ordinary time of the church calendar is the Christ
the King to whom this church has dedicated. The chapel which reflects the Canadian light atmosphere was designed by fathers of Quebec Foreign Missionaries, especially by Fr. Gilles Caron.

Development
After the leadership of Fr. Jean Charles Loiselle, Fr. Bélanger Marcel
and Fr. Fr. Jean Guy Dupont, Fr.Jean Charles Loiselle is now our chaplain
again. About 490 people from 281 families belong to the community as one body of the church together in a homely faithful atmosphere.
The church committee has made a rule which is taken from the farseeing proposal of NICE II including the term of the chairman and vice chair, division of each role by priest and lay so that the priests, religious and laity share the common responsibility in the spirit of the Second Vatican Council. The Sunday school is active and many children attend joyfully with the support of young leaders and Sisters. They help
the children of Cagayan de Oro in Mindanao Island in the Philippines through several activities like charity concerts held at the chapel by non Christian musicians who live near the area. It has been a regular program through many years. As the same family members of Setagaya Evangelical
Cooperation Unit the Akatsutsumi Church and Matsubara Church help
each other for their church bazaar.

There are beautiful flowers blooming all over planted by the care of Fr. Maurice Labbe and Fr. Vincent Florenté. The big fir trees which are decorated with red bright illuminations on the Christmas and many cherry trees which are all open beautifully on Easter, are the notorious features of this church among the people in Kyodo, Akatsutsumi, Sakurajousui and Matsuzawa area. Together with the leadership of Cardinal Shirayanagi,
Archbishop Okada and Bishop Kohda, Akatsutsumi Church will seek a better place at the church more open to the regional society carrying the awareness of Catholic Church in Japan by enhancing the spirituality of the community people of the church.  (By Keiichiro Takishima)