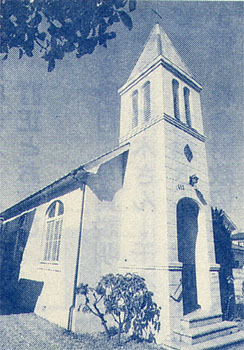 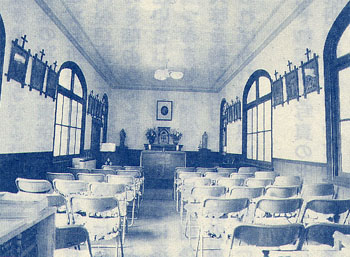 In 1876 when it was still very difficult for foreigners to stay outside of the foreign settlement in Tokyo, a young man, Mr. Yamagami, had asked Fr.Germain Leger Testevuide, M.E.P. to come to his village of Shimoichibugata since he was so much sympathized with the Christian spirit of freedom, equality and philanthropy. On the arrival of Fr.Testevuide, whole villagers had welcomed him with joy. Mr. Yamagami talked about those days in his last year as followed. ” From Yokohama I have invited Fr. Testevuide. Once he had started catechesis class the people of the area had rushed into the class and after that so many people wished to be baptized successively.” In 1877 the number of the faithful had already reached 50. This kind of trend had continued till 1890. In the center of the village the residence of the chaplain and the chapel had been settled up. Until 1890 the total number of the parishioners had become 250 and it seemed as if the whole village people might become Christians soon. Fr. Testevuide mentioned that the faith community of this Church had reached already to the third stage.But a trial time had come. In 1890 Fr.Testevuide had been struck down by a serious illness and then had to leave Japan for his treatment. But Fr.Testevuide and the people had been united deeply in heart. The people who had lost their merciful pastor had been entrusted under the pastoral care of the two missionaries who were in charge of the wider area of the district for two years. During this period the Tenshu Catechetical School had to be closed due to the lack of finance. Then people had no place to learn catechesis. Furthermore in 1892 the big fire came out all of a sudden and the whole village had burnt down to the ground. From this incident people had moved out of the village to a city. In 1892 Fr. Jean George Mereau , a young priest of 27 years old, had arrived at his new post as the first chaplain. His instruction on catechesis was very strict. It might be quite difficult to follow his teaching for the people of the church who had been fostered their broad view in social issue and involved in political activities from the early time of this church. Due to the reconstruction of the church after the big fire, Hachioji Church in Honcho became the base of evangelic mission and the Church in Shimoichibugata had made a new start as the annexed church to Hachioji Church. In 1927 commemorating the 50th anniversary of the Church started by Fr.Testevuide, the Church in Motohachioji which used to be called Shimoichibugata Church in the past became Izumicho Church and had been newly reconstructed brilliantly by the hands of the people . The same chapel has been used up to now. After Fr. Mereau who had been served for 44 years, from 1936 the pastor had been changed from foreigner to Japanese. From 1943 Fr. Anthony Saichi Nishida who had been visiting the both churches regularly for his careful mission work, had been assigned as the chaplain. He was the first chaplain lived at the parsonage which had been constructed at Motohachioji by the support of both church community members in commemorating 100 years anniversary of the Church Mission. After 100 years of the history the Church could have the chaplain settled in the church yard. The next chaplain to Fr. Nishida was Fr.Francis of Assisi Tatsuo Iwako and the Church had gradually developed. ( Reference: Tokyo Catholic News No.81, April, 1991 )