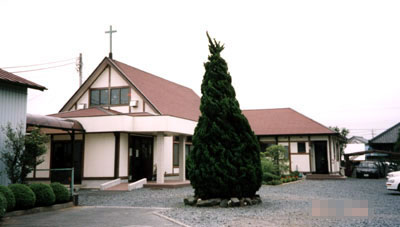 St. Thérèse of the Child Jesus

Location of the Church and the background

Sawara is located about 100 km away from Tokyo. In 1951 Fr. Bernard Ford, a missionary of St. Columban Foreign Mission Society had built a new Chapel at the waste land where the starch factory once built. That is the start of the Church in Sawara. In 1955 the second missionary Fr. Ignatius Hayden has established Shirayuri Kindergarten at the neighboring land and soon he entrusted the task to Franciscan Sisters of the Annunciation. It was officially acknowledged as a Parish in 1967. 52 years after St. Columban Foreign Mission Society have left Sawara. From 2003 the Kindergarten has been transferred under the name of educational foundation “Aishin Gakuen”  up to this day. Since the Sisters have managed the Kindergarten for more than 40 years long time and lived there, it has given the people in the area the strong impression of Shirayuri Kindergarten and then the name of the kindergarten has become famous than Sawara Church. For example when someone gets a taxi and tell the driver where to go it is better to tell Shirayuri Kindergarten than Sawara Church to make him understand the place immediately .At first the chapel was wooden one-storied house and there was a movable partition at the center so that the front space can be used for conference room. The parsonage was a two-storied house at the south of the chapel . But due to the deterioration it has been reconstructed to be one building with the chapel and parsonage as of today.

The successive chaplains of the Church

Fr. Bernard Forde, S.S.C., Fr. Ignatius Hayden, S.S.C., Fr. Pat O’Dwyer, S.S.C., Fr. John Dooley, S.S.C., Fr.Thomas Grogan, S.S.C., Fr.Art Breslin,S.S.C., Fr.David Padrnos, S.S.C. have been the successive chaplains of St. Columban Foreign Mission Society from the start of the Church and after them the diocesan priests of Archdiocese of Tokyo follows who were Fr.Aloysius Shizuo Aoki, Fr. John Shigeru Ozawa, Fr. Vincent de Pau Minoru Sugita and then the present is Fr. Peter Tatsuo HISATOMI. 【About the parishioners】 In early times the Church was intended actually for people on the opposite bank of the Tone River in the North including Ibaragi Prefecture but the small chapel became full of people. Later on Catholic Kashima Church of Saitama Diocese has been established about 20km north in south east of Ibaragi prefecture and Catholic Narita Church has been built about 40km west. Because of these environmental changes the parishioners of Sawara Church has been flown out to these new churches largely.

Sawara is alluvium region of the Tone River. Even today the black carbide of the stems of reed can be taken out from the layer at 50 – 70 meters deep by boring the ground. On the ancient map the majority of urban area in Sawara City might be under the water of “Katori ga Sea” and the many reeds taller than man had grown thick around the place of the present Church. The origin of the name Sawara could be guessed from several traditional talks such as Sahara ( sand plain ), Sasahara ( bamboo of grass field ),and Sasara ( cups of rice wine ) because there was a place to bake potteries ceramics. It is certain that Sahara had been the place made by the accumulated sands flown out from the river. In the Middle Ages and Modern Ages Sawara had developed as a trading center of agricultural products such as brewage industry, collecting agency of rice dealers, distributors of manure and wholesaler for retail dealers. These traces of some historical buildings in old times still remain in Sawara and give us some idea of the old prosper even today.

The population of Sawara has been kept around 50,000 without much change so far but in 2006 the name of the city has been changed to Katori City in combination with the neighboring towns and the new Katori City has 90,000 inhabitants. But the environment of Sawara has not changed so much and is still in the farms. The number of parishioners has not been expected to grow much as of now and our problem is how to increase the number of parishioners since the neighboring towns have been included into our share already. The Church also has offered the rooms for the meeting of AA and NA as much as we can to be open toward the need of outside related activities. But some measure has to be taken to increase more parishioners because at present there are only 10 people attending the Holy Mass. This has to be solved at any rate actually. In Sahara there are two big shrines festivals twice a year. But the number of the people who are under the protection of a community deity of the shrine do not increase by these big festivals. This phenomena can also give us a suggestion about the number of parishioners of Sahara Church. Big event is good we do not deny these festivals. But first of all the parishioners should seek to grow one by one. Our Holy Father tells us for the laity to be a witness as Christians in their daily life for evangelization. Fr. Hisatomi tries to raise the nature of the parishioners up and gradually the number of baptism and catechumens are increasing.   Founded by The Columbans about 50 years ago, Father Ford from the Columbans set up a base for missionary work in Sawara.