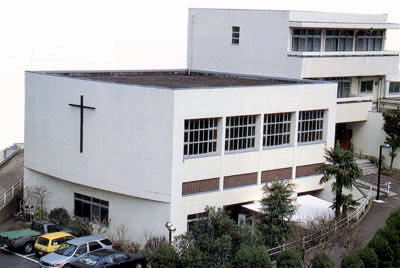 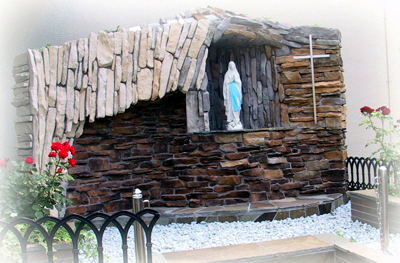 Around 1877 priests of the Paris Foreign Mission Society had travelled around Matsudo, Nagareyama and Kashiwa districts and spread the seeds of the Good News of the Lord. As the result they had borne the fruits of many Christian families. But the Church was so far away from those people and so they had waited for the priests coming on the mission tour visiting their place four or five times in a year. For a long time they had been longing for building the Church near along their way line. In 1949 Archbishop Peter T. Doi with his strong will indicated Fr. Luke Sozaburo( future Bishop of Yokohama Diocese) Arai who had been visiting the place often on the mission travel to look for the land to build Matsudo Church. In July, 1950, after selecting different places a magnificent Church had been built on the small hill rising a large cross to the sky and dedicated solemnly by Archbishop Peter T.Doi with many people. In 1972 the Church has been transferred to the present place due to the readjustment of the city lots for redevelopment plan in front of the station area.

JR Joban line runs parallel with the Route 6 Highway of Mito Road. After passing Senju and Kanaoka and then crossing the Edo River which is the border between Tokyo and Chiba prefecture, it arrives at JR Matsudo Station which is the gate of Toukatsu district in Chiba.The white four storied Church which backs against the rich green hill.is about 7 – 8 minutes walk from the station. The distribution of parishioners ranges widely from Matsudo City to Tokyo metropolis, three prefectures, 10 cities and several counties. The total number of the parishioner is about 1,600 plus 200 Philippine people and fifty Spanish speaking emigrants who are mainly from Peru. The Church has become one of the bigger church communities in Archdiocese of Tokyo. In the Church yard there is St. Michael Kindergarten and about 120 pretty children commute lively every weekday. Carmelite Sisters of Charity also live near at their Matsudo Formation House and they participate actively for evangelical mission of the Church together with the parishioners. During these three years two young girls have made the first vows as the Carmelite Sisters of Charity.

The Church community has been divided into 8 regional groups so that the people can have better communications and support each other more than ever before. The Church committee under the Church organization has changed the name to pastoral council of the Church which consist of the representatives from 8 regional groups since 2004 and they discuss how to carry out the evangelical & pastoral activities of the Church. The motto of this council is to think, discuss and decide all together. Women’s group and St. Joseph’s group ( men’s group) are quite active also. Women’s group is divided into several regional groups and they serve for Church activities by taking turns. The members of St. Joseph’s group were once the fighting men in their active business world. Now they serve the Church with their various talents of support. But we can’t avoid surging waves of the aged society. It is good thing that the youth group called “Youth Gathering ” start leading active part of the Church by reaching out their hands over the parish. It is certain that they will become the central part of the Church activities in the near future. The Church schools for children and students are also quite active. In 2002 the group of junior & senior high school students has been started again and it makes the Church more activate. the group of “Youth Gathering ” support to back up the Church school and the group of junior & senior high school students. For the foreigners there are Japanese language class and seminar for infant baptism in addition to English and Tagalog Mass. The group of foreigners, mainly Pilipino people, has organized voluntary the Matsudo Catholic Foreigners’ Action Group (MCFAG) to have spiritual programs actively like Cursillos and Novena besides their daily mutual assistance. In 2000 of the Holy Year the Church celebrated 50th anniversary. One century ago the Church has been born in the Toukatsu region and the light of the Lord has been carried on by many parishioners. We will make our effort to keep it till we will hand it over to the next generation as being the people of conscience in the society for creating the better world together.