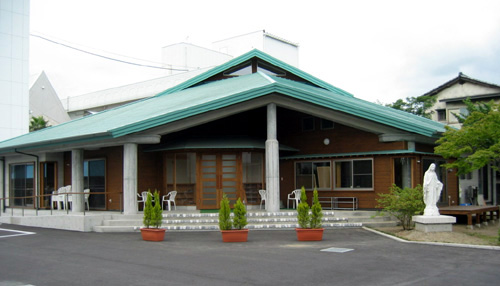 Kisarazu City used to be a port town as it was located before at the central area of Boso Peninsular facing the Tokyo Bay. The Kisarazu was named after the elegy “Kimisarazu” ( Please do not go away) of Japanese ancient prince in legend ” Yamato Takerunomikoto” who mourned over the death of his wife, Princes Ototachibanahime who was drown in the sea to put down the stormy sea for him during his expedition . The spiritual foundation of Catholic Kisarazu Church in the history had been dated away back to the evangelical mission by Fr. Vigroux Francois and Fr. Cadilhac Hippolyte of Paris Foreign Missionary. The foundation had been built by their hardship and strong deep faith which made them landed at Kisarazu by sailing from Kawasaki, and after that they had traveled by horse riding and walking to go around Boso Peninsula for their mission. During the time of postwar chaos a Nissen hut of the U.S. occupation forces had been used as a temporary chapel. In 1951 the reclaimed ground on Kisarazu Bay made by the reclamation plan for Tokyo Bay adjoining section, has been purchased and a small temporal church has been built there. This is the beginning of Catholic Kisarazu Church. In 1952 the chapel was made in the present Maria house. In 1955 at last the present chapel has been built by the special efforts with faith of the newly assigned chaplain and the lay people, and by the warm hearted contribution of dear brothers & sisters from Ireland.

The Church is located at the end of the old shopping street. Inside the front gate there is a western style personage with cross shaped poles on the left side which was built in 1997. The wooden one-storied house with red brick roof is the chapel on the right side across the lawn. There is a two storied wooden old convents of Missionary Sisters of Christ the King at the back. At the both sides of the convents there are white one-storied old chapels which are now used as the assembly hall, and Colman House which is used now for children’s the play in the yard. That’s all about in the church yard. In the chapel there are an alter made of granite on the center, the statue of St. Colman on the right and Our Lady embracing the Infant Jesus on the left. In the wall of the chapel the color glass is inlaid and soft sunlight shine in the chapel makes a simple silent space.

The features of Sunday Mass are prayers with hymns and spiritual songs taken from Teize Community. The Church provides various activities and programs throughout the seasons among which the summer camp at Tadeshina and Agape Bazaar in autumn are most popular. The Church emphasizes the catechetical education for the kindergarten and elementary school children. There are children’s class and ss. There is Kururi Kindergarten in Kimizu City about 20 kilometers away from Kisarazu City. In 2002 the 50th anniversary of Kisarazu Church have been celebrated. By the strong sea wind being blown up from Kisarazu Bay the chapel has become pretty much tired and so some say that the chapel should be renovated soon. But the Japanesque appearance of the chapel designed by Irish designer gives irreplaceable encouragement and healing place to the people’s heart who visits here. The Church has about 670 members. Sinnittetsu Kimitsu Factory is nearly located and families moved from Fukuoka and Nagasaki area for transference are quite many. In 1973 the members were 266 and since then it has been increased in its own way but the Church is still small among other parishes in Archdiocese of Tokyo. By the opening of Aqua Line binding between Kawasaki and Kisarazu, Kisarazu became the nearest city to the sea. We can expect more people coming to join the Church and increase the number. Please come to the Church. ( Reference: Catholic Tokyo News Vol. No. 178, November, 2000)