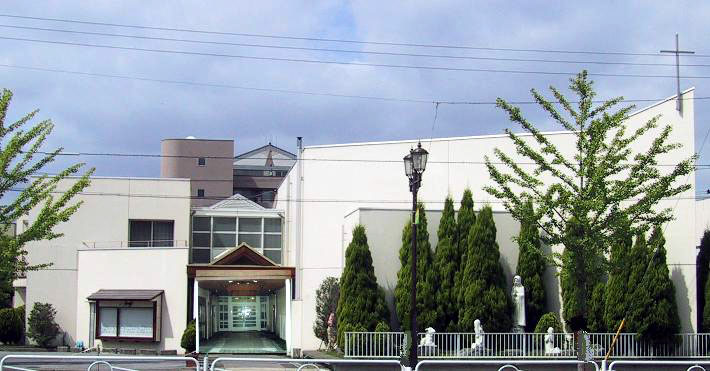 The Word of God Sharing

Support project for the Congo “One cup of Milk”. “Patchwork Group” support for street dwellers in India.

Please look at the home page below about the details.

Walk along Fukiage-dori for 6 minutes from the West -Exit of JR Goi Station on Uchibou line. The church is easy to access for it is located in the central area of the city.  By car. Get off Tateyama freeway at Ichihara interchange.Advance to the Route 16 direction, and pass the grade separation of the JR Uchibou Line, turn right at the second signal, and turn left at Fukiage-dori to the opposite side of the station and go down the road for 200 meters. Parking space for 20 vehicles. GoogleMap

History In 1964, Goi Catholic Church was founded by the Columban Missionaries. In Feburary,1965 the church was dedicated to St. Joseph the Worker as a patron Saint by Archbishop Tatsuo Doi. That time the population of the Ichihara City was only about 70,000 and the church stood at the square quarter of wide rice field. Before that time, from 1959 industrial business had started as a part of Keiyo Industrial District. For the pastoral care of the Catholic faithful who transferred from Kyushu for getting their job, the Holy Mass had been offered at the community center of the city by Columban Fathers came from Chibadera Church. Looking far into the future of Ichihara City, a site for a new church had been purchased and its rice field had been filled up to build the new Church. While the Industrial District was growing, the number of the parishioners also increased and then the church space became small for the community. The community hall which was disposed by U.S. Army became old. Then a committee to investigate a reconstruction of the Goi Church had been organized in 1979. In 1984 the a new chapel and parsonage have been built by overcoming many difficulties.  On 28th of October in 1984 the newly rebuilt Goi Church has been dedicated by Archbishop Peter Seiichi Shirayanagi. It had been a long way till this day of the dedication which had been supported generous by Columban Missionaries and Chiba Block Parishes at large since the very beginning of the construction. The title of memorial booklet issued for the dedication was “Toward the church for others with others”. Fr.O’Sullivan took this phrase from the New Testament ,”A great banquet is ready and go out quickly to the streets and lanes of city to bring in all the people you meet there.” Present Situation This church was still young and at the beginning stage of growing. The 1st generation of the church had been done by Columban Missionaries. In April of 2003, Fr. Takashi Iwasaki was appointed as the 6th chaplain of Goi Church and we called it the starting of the second generation which was suitable to the start of new millennium.Then in April of 2006, Fr. Keiji Sakakura was appointed as the 7th chaplain. In April of 2009, Fr. Yutaka Kato was appointed as the 8th chaplain. The population of Ichihara City increased to 280,000 and the number of the parishioners have reached to 460. Historically this Church has been started with the people moved from out side of Chiba prefecture but now they have settled down their living in this city. On every Sunday English Mass has been offered aside from Japanese Mass. The children who attend the Mass are quite many. We hope they will be the supporters and driving force for Goi Church in the future. The chaplain made some devices for those children who understand only Japanese. Foreigners also were invited to join the bazaar, summer evening party and then the representatives of foreigners’ groups can attend the church committee meeting to discuss the matters with Japanese people. The parish community consists of six regional groups and each group serves for the church, sharing the roles of cleaning and tea service by turn weekly. They also attend Bible class and other activities lively. After the Mass tea is served in the lobby floor. Addition to the warm atmosphere in our parish community, we have also broad views to support each other with Kisarazu Church, Tateyama Church, and Kamogawa Church as one ” Awa Kazusa ” Regional Mission Group. ( “Catholic News of Archdiocese of Tokyo, No.207. on Dec. 2003″was used as a reference)