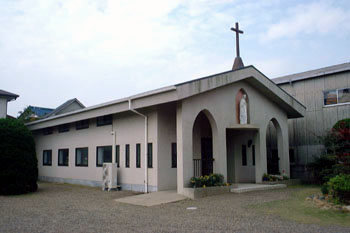 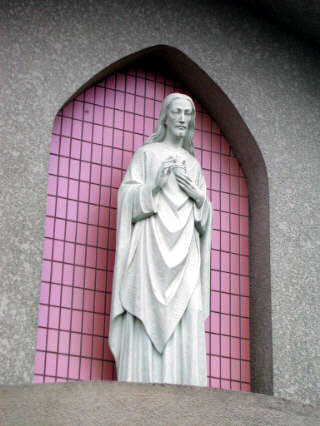 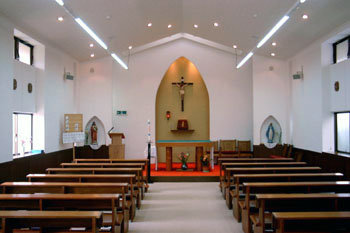 By car
1. From Chiba City, take route 126 toward Choshi City. Choose not a big road but a narrow road , which is on the right side of the Kasuga-cho Crossing, and make a right turn just before the railroad crossing, then go straight along the road for about 500 meters.

2. From Sahara or Komigawa. Take route 356, toward Choshi City. Turn to the right street located beneath the footbridge in front of Honjo Elementary School. Make a right turn just before the station. Cross the railroad crossing and turn left, then go straight along the road for about 500 meters.
GoogleMap
Together with foreigners, people’s ties have been fostered through many years in the church community. Choshi City is warm in winter and cool in summer and thus keeps good climate throughout a year for tourism. People from Tokyo can visit here by super express within two hours and then church is ready to welcome visitors on their way of short trip to Choshi.

In 1883 Choshi Church was established as one of the four Mission Halls in Chiba Prefecture. In 1951 it was dedicated as an official parish by Columban’s Missionary Society. Father O’Sullivan was the first chaplain and since then Columban’s Missionary Society had carried on the pastoral work of the church. The church celebrated 50 years anniversary
in 2001. Father O’Sullivan was from Ireland. He seemed being a strict person at the first glance, but actually he was a very kind man, full of humor, and was trusted by all the community people.
Since his arrival as a the chaplain, though Choshi Church is a small parish, he had took up various important constructions and completed the church graveyard. He also has made the reconstructions of the old chapel and old parsonage which has been remained now. All the people realized with thanks that his indomitable spirit and his trust God’s will had made these workings possible.

Present Situation
At present many foreigners who came to work for Japanese fishing companies near by belong to Choshi Church. At the beginning we some how lost our local sense but gradually the atmosphere of international community and sense of belonging have grown up among us. Now we share the joy of cooperation and walk our life in faith together. Father O’Sullivan always said that even if we have different nationalities and languages but our faith is one without any border.
In such a way we Japanese people of Choshi Church luckily have given the opportunities to get acquaintance with the people from South East Asia , Korea, South America, U.S.A, Nigeria and Australia. Now we together pray at the Holy Mass and join our church activities as one faith community by getting over the changes of our languages. Choshi is cool
in summer and warm in winter fit to tourism. From Tokyo it takes about 2 hours only and so we hope that people who will come Choshi for tourism will make a chance to stop by the church.

The year 2001 was the celebration of 50th Anniversary of the church and at the same time the beginning of the new millennium. In the current of our church though we have problems of lack of youth generation etc., but on the other hand it will be a time of home coming of the people who once have left Choshi after spending some years outside for their university study and employment. We have hope and expectation that we will walk toward the100th Anniversary together with those people who will return to Choshi again.
.
The patron saint of Choshi Church is Christ The King and this community will become more international as Christ is the King of the kings in the world. We hope that the priest and the faithful are united as one faith so as to be ready for the coming Kingdom of God and walk toward the 100th Anniversary by renewing our faith nourished by the faith in the Lord.