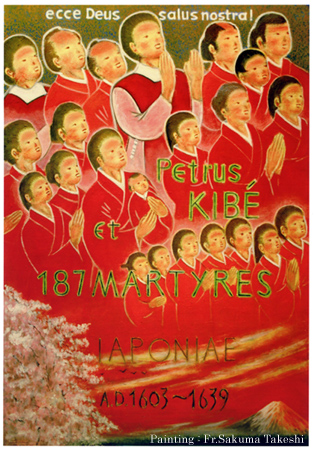 THE BEGINNING OF CHRISTIANITY IN JAPAN

Christianity was first brought to Japan by St. Francis Xavier in 1549. He stayed in Japan for only a little over 2 years, but his missionary activity continued under the direction of dedicated Jesuits such as Cosme de Torres, Lawrence Ryosai and Luis de Almeida. Thanks to their great devotion the Catholic Church was well established and began to grow with churches and hospitals in Kyoto, Osaka, Yamaguchi and in the Kyushu region. The Christian faith spread among the feudal nobility and the samurai, as well as the general population.

Father Alessandro Valignano, the official Jesuit Visitor, came to Japan in 1579 and set up a program for the priestly education of local Japanese, with minor and major seminaries. At his suggestion four Japanese seminarians were sent to Rome as messengers of the Catholic Lords of Japan. One of these young delegates was Julian Nakaura, who went on to become a priest. He is counted among the martyrs that are to be beatified this year.

SAINT PAUL MIKI AND HIS FELLOW MARTYRS (26 MARTYRS OF JAPAN)

This period of Jesuit mission in the later part of the 16th century coincided with Oda Nobunaga’s consolidation of his rule over most of Japan. However total control was only achieved by his successor Toyotomi Hideyoshi, who was determined that nothing would interfere with the complete unification of Japan. In 1587, Hideyoshi issued a decree expelling all Catholic missionaries, which was probably done to limit the influence of European nations in Japanese affairs. As a consequence of this decree, a Jesuit priest Paul Miki and a Franciscan priest Pedro Bautista with 24 companions were martyred at Nishizaka in Nagasaki in 1597. This group included 20 Japanese, 4 Spaniards, 1 Portuguese and 1 Mexican, Felipe de Jesus. They became known as the 26 Martyrs and were canonized by Pope Pius IX in 1862. Their feast day in Japan is the 5th of February.

PERSECUTION AND MARTYRDOM IN THE EDO PERIOD

The persecution of Christians grew even more severe, with the establishment of the Tokugawa administration in Edo (present day Tokyo) in 1603 by the Shogun Ieyasu. At that time, there were approximately 400,000 Catholics in Japan, and some tens of thousands were martyred during the early Edo period. We will never know the names of many of those who died. The scale, the ferocity and the length of the persecution of the Christians in Japan during this period is something that has no comparison. From among these many martyrs, 205 were beatified in 1867, which included a group of 55 Christians martyred in Nagasaki on September 10th, 1622. Another group of 16 martyrs including the Dominican Thomas Nishi and the first Filipino saint Lawrence Ruiz were canonized by Pope John Paul II in 1987.

Julia Ota was a Korean girl brought to Japan, during Hideyoshi’s reign, and was raised in the household of the Christian Lord Konishi Yukinaga. She later entered service at the palace of Shogun Ieyasu as a maid servant, where she became well known as a devout Catholic. When in 1612 the Shogun demanded that all his attendants renounce Christianity, Julia refused and was exiled to the remote Izu islands. Another attendant John Hara Mondo, originally from Sakura in Chiba, also refused to renounce his faith and was dismissed by the Shogun. Later in 1623, with 49 other Christians he was martyred at Fuda-no-tsuji, near Shinagawa, Tokyo. He also is to be beatified this year.

BEATIFICATION OF PETER KIBE AND 187 MARTYRS

The Beatification ceremony that will take place on November 24th, 2008 in Nagasaki will honor the faith and devotion of 188 martyrs from this early Edo period. These Christians are from all over Japan and come from all levels of society; lay people and priests, women and children, samurai, commoners and disabled. The two largest groups are the 52 faithful from Kyoto martyred in 1622 and 53 from Yonezawa in Yamagata Prefecture martyred in 1629. The last of the 188 faithful to be martyred was Father Peter Kibe, a Jesuit, who was executed in Asakusa, Tokyo in 1639.

184 of the 188 martyrs are lay people, as most priests had been exiled by this time. Families and small communities of lay people supported each other in maintaining their faith. The 4 priests who were martyred had secretly returned to Japan and ministered to the faithful as best they could while hiding from the authorities. They were like the ‘good shepherd’ who is prepared to lay down his life for his flock.

THE RENEWAL OF THE CHURCH IN JAPAN

During the 250 years of the Edo period, the ‘hidden Catholics’ of Nagasaki and Goto in northern Kyushu, secretly maintained their faith and passed it down to the following generations. In the mid 19th century, Japanese ports were reopened and foreigners were once again able to visit Japan. Priests belonging to the Paris Foreign Missionary Society were sent on mission to Japan and began building churches in many part of Japan including Oura church in Nagasaki. A group of ‘hidden Catholics’ from Urakami, a district of Nagasaki, visited the new church and professed their faith to the French priest: a dramatic encounter after 250 years of persecution. Even at that stage, Catholics were not free from oppression and discrimination, but eventually freedom of religion was acknowledged for everyone and the Catholic Church was able to minister openly again.

The Beatification of the 188 martyrs is an important occasion for the Church in Japan to reflect on the faith of our Christian forebears of 400 years ago. We too need to develop a ‘strong Faith in God’, ‘to place our Hope in God no matter what’ and ‘to live with Love all the days of our lives’.