Pope John Paul II stated in 1981 in Hiroshima: ”To remember the past is to commit oneself to the future.”

This year 2020 is another milestone year. 75 years ago in 1945, nuclear weapons were used in Hiroshima and Nagasaki, and took the lives of many. This eventually led to the end of World War II. For the past 75 years, many people have repeatedly expressed the miserable reality of war, stating the fact that war is not like a calamity such as an inevitable natural phenomenon, but “war is the work of man.” In the first place, “humanity is not destined for self-destruction.” Thus, it is not beyond human power to prevent such disaster.

Pope John XXIII started the encyclical “Pacem in Terris” with the following words, clarifying the meaning of “Peace” according to the Church.

“Peace on Earth—which man throughout the ages has so longed for and sought after—can never be established, never guaranteed, except by the diligent observance of the divinely established order.”

The “Peace” which the Church speaks of is the realization of a world in the order of God. That is, a world where all creatures has achieved the state according to God’s will, and such has not been attained.

Since the beginning of this year, we have been caught up in a situation we have never experienced before. The novel coronavirus disease is not limited to one country alone, but has now spread all over the world, having a great influence in various parts of this very globalized world. There are many countries where numerous people have lost their precious lives, and even at this point, many are still facing this threat in their lives. Moreover, vulnerable in the society and poor are much more afflicted by this crisis.

In order to solve this crisis of life for a world in a state of globalization, it has become clear that solidarity and support for each other on a worldwide scale is necessary.

Under the direction of Pope Francis, the Vatican Commission for Covid-19 was created to comprehensively address this crisis. Cardinal Turkson, the president of the commission, held a press conference on 7th July and stated that:

“We need global leadership that can re-build bonds of unity while rejecting scapegoating, mutual recrimination, chauvinistic nationalism, isolationism, and other forms of selfishness.”

Feeling left behind in the darkness of anxiety, we are tempted to make someone else the bad guy in order to gain our own peace of mind. The crisis of life is deepened by the divisions brought by exclusion and rejection. Now is not the time for conflict, but the time to reach out to each other to protect all lives. It is time to act to protect life, and not to take it.

“Blessed are the peacemakers, for they will be called children of God.”

Encouraged once again by the words of the Lord, let us build a world in which life is valued and respected, something that God Himself has always treasured, and let us strive to establish peace. In addition, as we live in a situation where various complicatedly intertwined issues put our common home in danger, let us renew our commitment during this Peace Week seventy-five years after the World War, to bring about God’s peace with the determination to work hard in solidarity with all peoples. 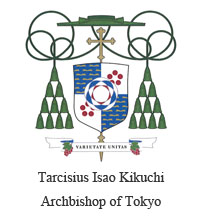