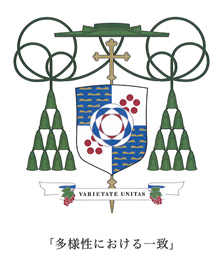 The crest embodies “diversification,” because a very modern design is arranged while the tradition is respected there is a traditional .design in the periphery of the crest. The central part is divided into four sections. In the upper left and the lower right sections, yellow wavelike objects are actually written in the blue background. The color of blue represents the sea and the sky. The wavelike objects represent the opened Bible. In other words, what is expressed here is the wish to spread the words of the Bible into the world. In the lower left and upper right sections，five circles are described. These circles symbolize. The five continents of the world as well as a human body. More specifically, each community represented as a circle gathers together to form a human body or the body of Christ. In additions the color of these circles is reddish wine color, representing the image in the Bible that Christ is a vine which each one of us is its branch. The center pattern, which consists of complexly intertwined five circles, symbolizes a flower bud just ready to burst. This design expresses the wish that the messages from the Gospel flourish in Japan more than ever.